Longevity in cancer patients with brain metastases is increasingly being observed. This raises discussions about how best to maintain a good quality of life for these patients. Recent data suggest that post-treatment quality of life (QoL) can be maintained using new treatment options, but little data exist regarding the QoL in long-term survivors. This study of 19 patients surviving greater than two years from the initial treatment of brain metastases suggests that long-term QoL can be better than at the start of treatment and perhaps even better than normal, especially between three and five years post-treatment. This improved QoL seems mostly attributable to improved functional and social well-being and is possible as long as emotional and physical well-being are maintained within the normal range.

Quality of life (QoL) is becoming increasingly important as patients survive longer after treatment for cancer. This is particularly so for cancer patients who develop brain metastases. Whole brain radiation therapy (WBRT) and chemotherapy were previously the standard of care treatments, and the combination of these treatments, along with the progression of the disease itself, often affected neurocognitive function and therefore QoL [1-2]. Due to these increasingly recognized complications, the trend in the past decade has been to move towards radiosurgery for brain metastasis treatment and immunotherapy, where possible, for systemic treatment [3]. This seems to have resulted in less acute treatment-related toxicities as supported by recently published QoL data by Skeie et al. showing that the use of radiosurgery in conjunction with anti-cancer treatments did not negatively affect the QoL in patients with brain metastases in the first 12 months after stereotactic radiosurgery (SRS) [4]. The longer-term QoL outcomes, however, remain unknown and are the topic of this retrospective case series.

The Yale Gamma Knife database was queried for long-term survivors - defined as survival of greater than two years following initial diagnosis of brain metastasis. Of the 79 patients identified, 19 were willing to participate in testing. All participants completed the Functional Assessment of Cancer Treatment for Brain Tumors (FACT-Br) test in a single session [5]. Overall QoL scores, along with scores from the four individual components: physical well-being (PWB), functional well-being (FWB), emotional well-being (EWB), and social well-being (SWB), were then compared with normal and zero and the 12-month data from the SRS study by Skeie et al. discussed in the Introduction. The Kolmogorov-Smirnov normality test was applied to our case series data and the results were noted to be normally distributed. Therefore, the statistical significance of our findings was determined using the two-tailed T-test for parametric data.

Median patient age was 65.5 years (range: 50 - 88). Time from brain metastasis diagnosis to testing was 25.6 to 120.6 months (median: 60 months). The number of brain metastases treated ranged from one to 10 (median: 4). The mean total lesion volume treated was 14.1 mm3 (range: 0.6 - 39). Melanoma was the primary diagnosis in eight patients, lung cancer in six, and one patient each had renal, ovarian, breast, testicular, and rectal cancer. Six of the 19 patients were treated with immunotherapy only for their systemic disease, five received a combination of chemotherapy and immunotherapy, and eight received chemotherapy only. Three patients received WBRT early in their disease course. All patients were treated using radiosurgery during their course. QoL was not found to be significantly associated with any single clinical factor, including the type of systemic therapy, the form of brain radiation, or volume of brain metastases treated. 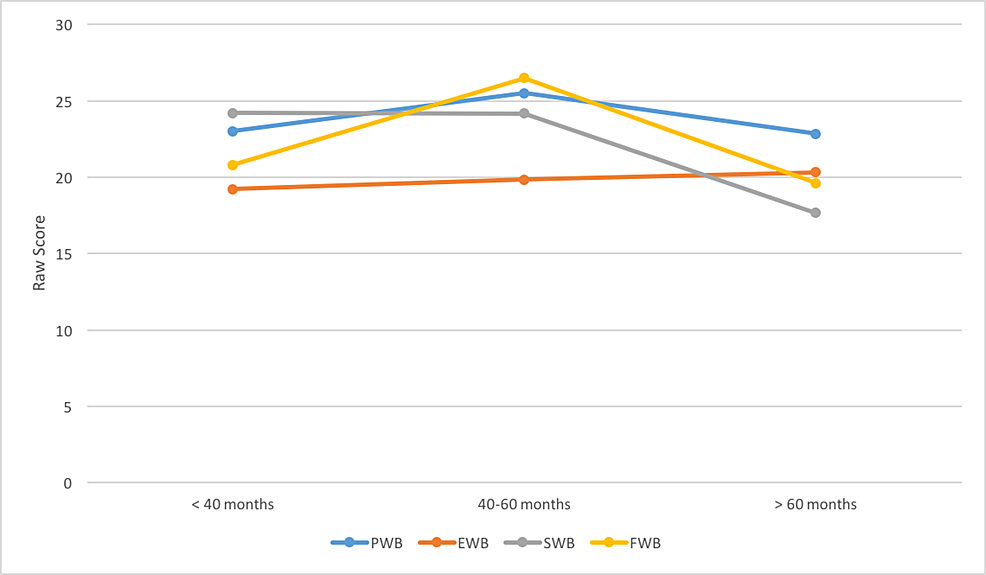 This case series represents a preliminary investigation into the QoL of long-term cancer survivors after treatment of brain metastases. While there are no normal ranges available for the total FACT-Br score, Skeie et al. recently published FACT-Br results for their study of 97 patients prior to and then for 12 months after radiosurgical treatment of brain metastases. Compared to their scores, the mean total QoL score in our cohort was 158.16 compared with their means of 130.9 and 132.2, although there was clearly an overlap between the ranges. Traditionally, a difference between means of greater than half a single standard deviation is considered likely significant; therefore, this data suggests that longer-term survival is associated with an improvement in the QoL.

When broken down into its components (PWB, SWB, EWB, and FWB) to try and determine what factors contribute most to total QoL, functional well-being was significantly higher than normal, while social well-being was trending upwards towards significance. SWB and FWB scores were particularly high in the 2-5 year post-treatment period, falling back into the normal range beyond five years. These results suggest that beyond two years after first treatment of their brain metastases, as long as their physical and emotional well-being is stable, long-term survivors feel better supported by their friends and family (SWB) and can work, sleep well, and enjoy their life (FWB). Also of note is that EWB was significantly better long-term post-treatment than in the first year of treatment as would be expected. This also contributed to the improved overall QoL scores in survivors. Beyond five years, all well-being scores returned to within normal range consistent with the possibility of being cured of cancer.

No specific clinical variables were found in this case series to be significantly associated with better or worse overall QoL. While WBRT and chemotherapy have been reported to affect QoL, this case series is limited by its small size. In addition, the interpretability of the results of this case series could be limited by several other concerns. The first is that QoL measures are usually obtained longitudinally, whereas in this case series, only single data time points are available. It is unknown if single time point data can be compared with longitudinal cohort data; future studies need to consider obtaining baseline scores prior to brain metastasis treatment, although the timing of the collection of this data relative to systemic disease course also needs to be considered. Secondly, it is unclear if it is reasonable to compare QoL results obtained in two different countries. Lastly, our cohort was obtained retrospectively and, therefore, those who agreed to undergo testing may represent a biased patient population with better QoL. Therefore, prospective QoL data collection from a much larger cohort is required to validate our findings.

This case series suggests that in patients with brain metastases who have been successfully treated for their cancer and survived greater than two years, QoL appears to be higher than in the first year after brain metastasis diagnosis/treatment and was highest between three and five years after treatment. Based on subcategory analysis, good QoL scores were predominantly driven by high functional and social well-being between two and five years in patients who had normal physical and emotional well-being. This case series, therefore, suggests that the use of treatments that least affect physical and emotional well-being may then enable long-term brain metastasis survivors to achieve a quality of life that might be even better than normal. Larger cohort longitudinal studies are needed to confirm these findings.

We would like to thank Dr. Richard S. Feinn for his assistance on statistical analysis.

© Copyright 2018
Reddy et al. This is an open access article distributed under the terms of the Creative Commons Attribution License CC-BY 3.0., which permits unrestricted use, distribution, and reproduction in any medium, provided the original author and source are credited.