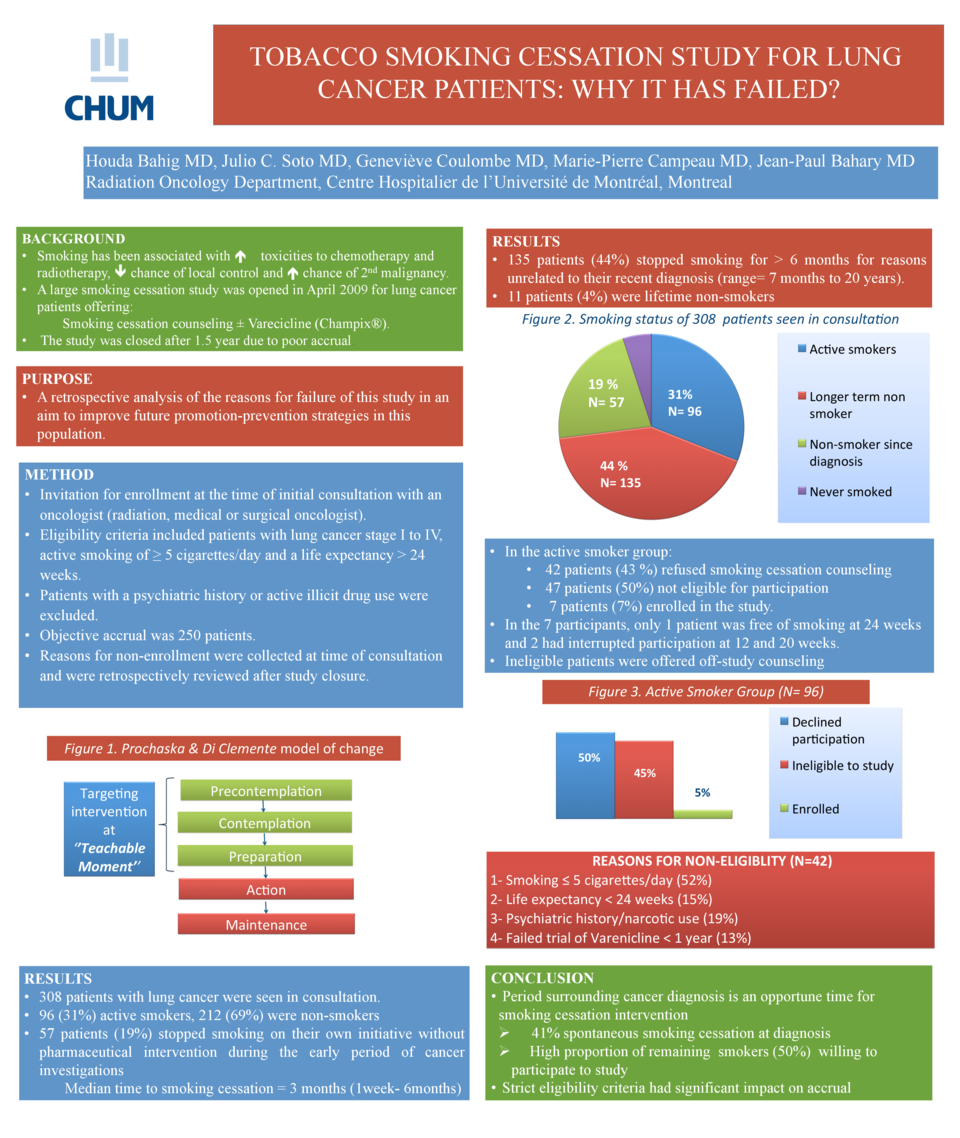 Study on Tobacco Smoking Cessation in Lung Cancer Patients: Why it Has Failed?

Introduction According to the most recent report of Canada Statistics, about 17% of Canadians are active tobacco smokers. Tobacco is directly associated with lung cancer, which is the most prevalent and mortal cancer worldwide. In the setting of cancer treatment, smoking has been associated with increased toxicities to chemotherapy and radiotherapy, decreased chance of local control and increased chance of secondary malignancy. However, regardless of the duration of smoking, clinical manifestations or stage of disease, studies have shown that smoking cessation is always beneficial. The Centre Hospitalier de L’Université de Montréal (CHUM) is a high flow quaternary center offering state-of-the-art treatments for lung cancer. Experts have suggested that the period surrounding cancer diagnosis and treatment decision is an optimal “teachable moment” with a potentially higher efficacy for smoking cessation. In the perspective of integrating a health promotion-prevention action to our care, a large smoking cessation study was opened in April 2009, offering lung cancer patients a smoking cessation counseling ± Varécicline (Champix®). The study was closed after 1.5 year due to poor accrual. We present a retrospective analysis of the reasons for failure of this study in an aim to improve future promotion-prevention strategies in this population. Method From April 2009 to September 2010, patients with newly diagnosed Non Small Cell or Small Cell lung cancer were considered for participation in a smoking cessation program consisting of personal counseling ± Champix as a pharmaceutical aid. Counseling was achieved by a healthcare professional trained at the smoking cessation center of the CHUM. Invitation for enrollment was made during treatment plan discussion at the time of initial consultation with an oncologist (radiation, medical or surgical oncologist). Eligibility criteria included patients with cancer stage I to IV, active smoking of ≥ 5 cigarettes/day and a life expectancy > 24 weeks. Patients with a psychiatric history or active illicit drug use were excluded. Objective accrual was 250 patients. Reasons for non-enrollment were collected at time of consultation and were retrospectively reviewed after study closure due to poor accrual. Results A total of 308 patients with lung cancer were seen in consultation. Of those, only 96 (31%) were active smokers, whereas 212 patients (69%) were non-smokers at time of their visit. Fifty seven patients (19%) had stopped smoking on their own initiative and without pharmaceutical intervention during the early period of cancer investigations. The median time of smoking cessation in this subgroup was 3 months (range= 1 week- 6months). A hundred thirty-five patients (44%) had stopped smoking for > 6 months for reasons unrelated to their recent diagnosis (range= 7 months to 20 years). Eleven patients (4%) were lifetime non-smokers. In the active smoker group, 42 patients (43 %) refused smoking cessation counseling, 47 patients (50%) were not eligible for participation and only 7 patients (7%) were enrolled in the study. Reasons for non-eligibility included smoking ≤ 5 cigarettes/day (52%), life expectancy < 6 months (15%), history of psychiatric problems or active dependence to narcotics (19%), failed trial of Champix within ≤ 1 year (13%) and current use of nicotine replacement treatment (6%). In the 7 participants, only 1 patient was free of smoking at 24 weeks and 2 had interrupted participation at 12 and 20 weeks. Conclusion: The period surrounding cancer diagnosis is an opportune time for smoking cessation intervention with 41% spontaneous smoking cessation at diagnosis and a high proportion of remaining smokers (50%) willing to participate to the smoking cessation study. Strict eligibility criteria had significant impact on accrual.
ADVERTISEMENT

Study on Tobacco Smoking Cessation in Lung Cancer Patients: Why it Has Failed? 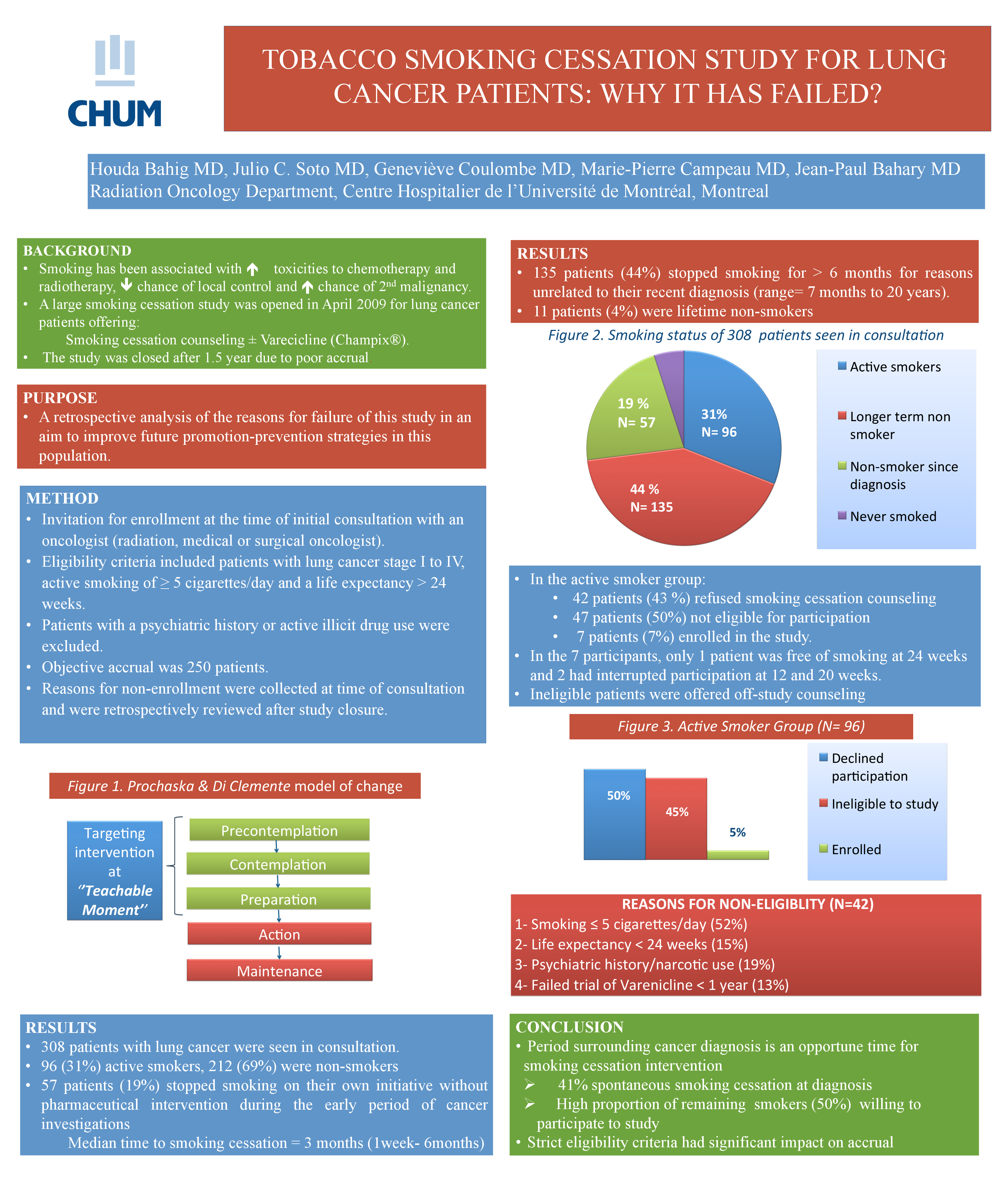