Subacute cardiac tamponade (SCT) is a potentially life-threatening condition that requires immediate medical attention. Combining careful history taking, focused physical exam, and the use of point of care ultrasound (POCUS) for early diagnosis with aggressive management can minimize potential complications. In patients with severe hypothyroidism and myxedema coma, clinical signs of cardiac tamponade may be masked and lead to delayed diagnosis. We present a case of a 67-year-old female with SCT secondary to myxedema coma, necessitating emergent pericardiocentesis following the identification of a large pericardial effusion with tamponade physiology. This case highlights the importance of thorough history taking with focused diagnostic workup, including POCUS in patients with an insidious presentation of SCT.

Myxedema coma is a rare complication of severe hypothyroidism that is potentially fatal [1]. Widespread use of thyroid hormone supplementation lead to diminished number of cases of myxedema coma. Today, the rarity of myxedema coma may subvert the physician’s differential diagnosis and delay the diagnosis of its potentially life-threatening complications. In a Taiwanese analysis, patients with primary overt hypothyroidism or myxedema coma are frequently missed in the emergency department [2]. Of note, 32% of the studied patients were found to have pericardial effusion, none with tamponade physiology. However, rare cases of cardiac tamponade has been reported with overt hypothyroidism [3-5].

A 67-year-old female with a past medical history of iatrogenic hypothyroidism secondary to thyroidectomy stopped taking her levothyroxine over a year ago. Three months prior to her presentation, she had been experiencing progressively worsening confusion and respiratory distress. According to her family, she became bed-bound approximately a week before admission, when she was brought in by ambulance after being found unresponsive by family members.

On admission, her vital signs were unremarkable with a heart rate of 70 beats per minute. Her physical examination was significant for lethargy, facial swelling, macroglossia, and bibasilar crackles of the lung fields. Laboratory findings were pertinent for thyroid-stimulating hormone (TSH) at 58.5 ng/dL and free thyroxine (T4) of 0.19 ng/dL. Electrocardiogram (EKG) showed normal sinus rhythm with low voltage QRS complexes with electrical alternans (Figure 1). The enlarged cardiac silhouette was noted on chest radiography (CXR) along with congested lung fields (Figure 2). Following consultation with the endocrinology service, the patient was started on intravenous levothyroxine and hydrocortisone and admitted to medicine telemetry service for further management. 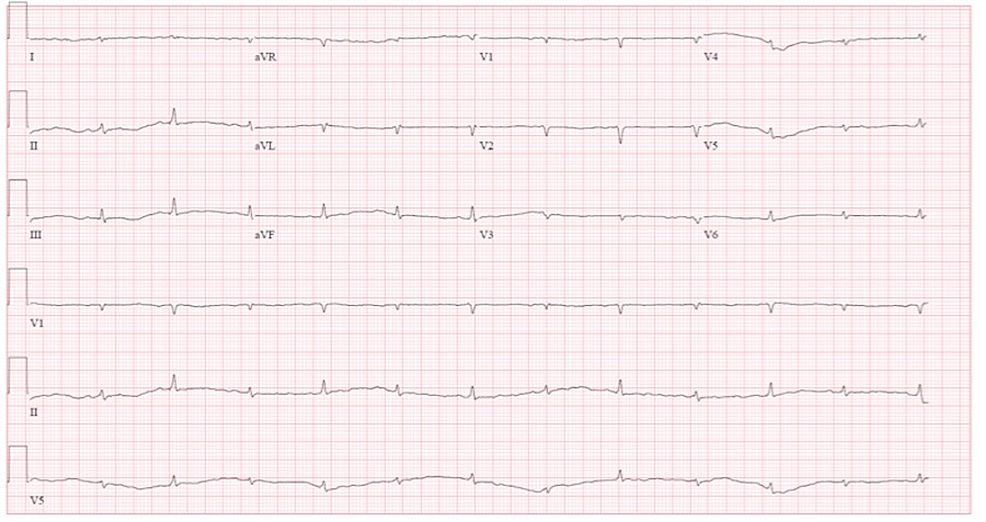 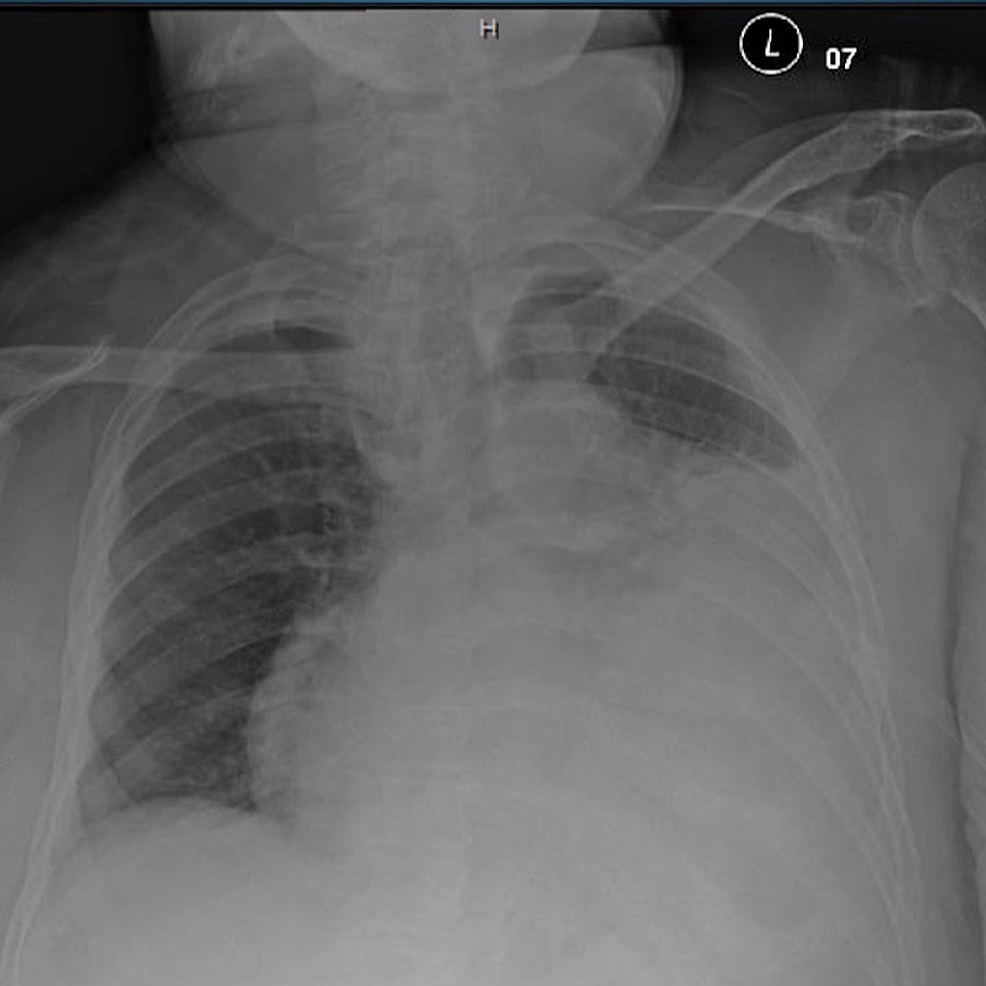 On the following day, a transthoracic echocardiogram (TTE) showed a large pericardial effusion with the swinging of the heart in the pericardial sac with the diastolic collapse of both atria and the right ventricle (Figure 3, Figure 4, Figure 5). The patient was upgraded to Cardiac ICU and underwent urgent pericardiocentesis with 1300 mL serous straw-colored fluid drained. Analysis of pericardial fluid was negative for malignant cells. Acid-fast bacilli stain and culture were negative. The patient was discharged on levothyroxine. Serial TSH and T4 measurements over the subsequent two months showed normalization of both values. On six months follow-up, repeat TTE showed diminishing pericardial effusion without echocardiographic evidence of cardiac tamponade. 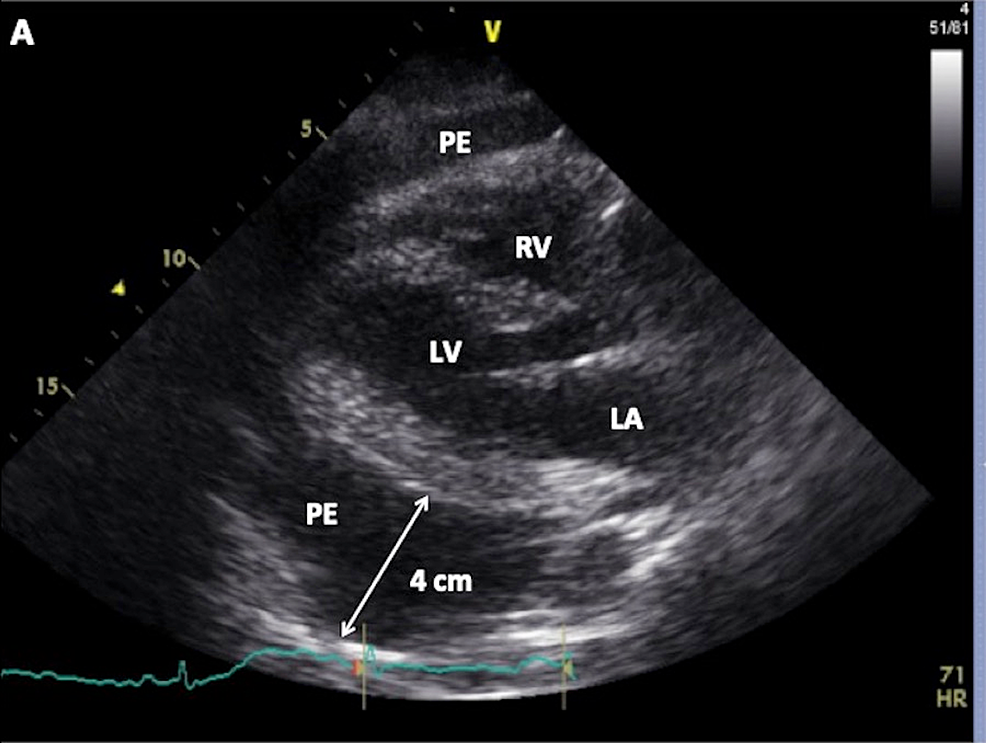 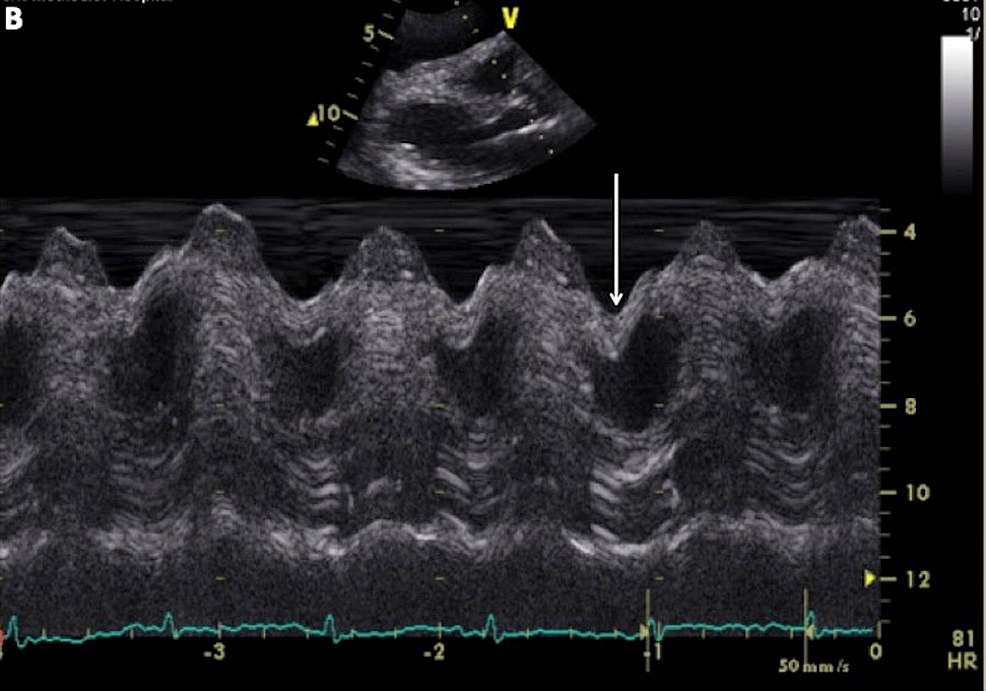 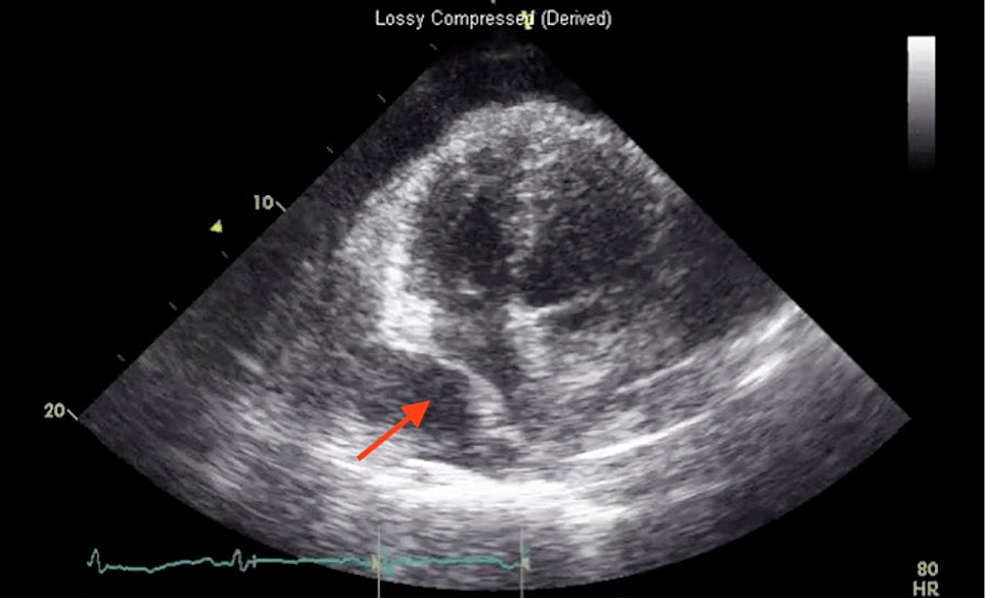 The most challenging aspect of this case lies within recognizing elusive clues in a rare disease. On review of available literature, the only reported case of cardiac tamponade associated with myxedema coma was diagnosed after pericardial effusion was incidentally found on CT of the abdomen [4]. When cases of hypothyroidism associated cardiac tamponade were included, initial diagnoses made with CT scan were also noted [6-9]. Urgency in managing myxedema coma likely overshadowed diagnosis of associated complications such as SCT. In our patient with insidious onset of non-specific symptoms and subtle signs, myxedema coma was diagnosed with an initial screening laboratory study and managed appropriately. Nevertheless, SCT was overlooked and resulted in a delay in initial diagnosis.

In cases like myxedema coma, the lack of thyroid hormone can result in sinus bradycardia, decreased myocardial contractility, and fluid accumulation in serous cavities like the pericardial space [10]. Normal heart rate observed in our patient resulted from balanced bradycardia from myxedema coma and tachycardia from cardiac tamponade. The normal heart rate blunted expected clinical response from both conditions, resulting in the diagnostic challenge of this case. Despite its limited sensitivity, EKG findings have high specificity and can be used as an adjuvant test to rule in cardiac tamponade [11]. Sinus tachycardia is an appropriate compensatory mechanism of decreased cardiac output in the setting of tamponade physiology. While sinus tachycardia is commonly seen in patients presenting with cardiac tamponade, retrospective analysis showed only moderate sensitivity and positive predictive value. In our case, sinus tachycardia is likely blunted due to decreased sympathetic drive from lack of thyroid hormone [12].

Clues overlooked in the EKG of our patient include the minimal voltage of QRS complexes and electrical alternans. Low QRS voltage (LQRSV) can be a result of low voltage potential generated at cardiac myocytes, such as infiltrative cardiomyopathy and extensive myocardial infarction. Extra-cardiac causes of LQRSV can be from large pericardial effusion, extreme obesity, and chronic obstructive lung disease due to increase interference of electrical conduction [13]. When LQRSV is seen in combination of electrical alternans, suspicion increases for cardiac tamponade with large pericardial effusion [11].

In addition to an abnormal EKG, an enlarged cardiac silhouette on CXR can also provide a clue to prompt further diagnostic workup of SCT. Radiological studies are often utilized in the emergency department for an expedited and generalized evaluation of cardiopulmonary disease. CXR has low sensitivity in patients with post-operative cardiac tamponade when compared to pre-operative CXR [14]. A relative increase in the size of the cardiac silhouette, especially acutely, leads to increased suspicion of pericardial effusion. While CXR can provide anatomical information, it lacks hemodynamic assessment, thus cannot be used to differentiate pericardial effusion from cardiac tamponade.

Ultimately, the diagnosis of SCT in this case was made with echocardiography on the following day. TTE is the gold standard to confirm the diagnosis of cardiac tamponade. While standard TTE provides detailed and accurate diagnosis for a patient with tamponade, availability, especially outside of regular business hours, can be an issue. In the emergency department, where time is of premium, bedside point of care ultrasound (POCUS) can help rule in the diagnosis to facilitate appropriate triage decisions and shorten time to definitive therapy as well as length of stay [15]. In our case, POCUS can be used to rapidly exclude pericardial as well as pleural effusion. While differentiating between pericardial effusion and cardiac tamponade may be complex, large pericardial effusion will likely trigger timely cardiology consultation and facilitate appropriate triaging decisions. In our patient with myxedema coma, the abnormal EKG with low voltage and electrical alternans should have prompted an earlier echocardiographic evaluation with TTE or at least POCUS, with appropriate cardiac consult to avoid an outcome that could have been potentially fatal.

The treatment of pericardial effusion will vary depending upon the underlying etiology and, most notably, the presence or absence of cardiac tamponade. In cases of tamponade physiology, emergent drainage of pericardial effusion is indicated. In patients with SCT from myxedema coma, thyroid hormone replacement therapy with appropriate clinical support should be provided simultaneously. A timely diagnosis of both myxedema coma and tamponade physiology is critical for successful treatment in this case.

Both cardiac tamponade and myxedema coma are life-threatening conditions alone. Our case highlights the importance of careful history taking supplemented by appropriate diagnostic testing while evaluating a patient with insidious SCT. Patients with severe hypothyroidism may not present with classic signs and symptoms of cardiac tamponade, such as tachycardia. Therefore a high index of suspicion is required to diagnose this life-threatening complication of hypothyroidism. Perhaps expedited POCUS or TTE should be considered routinely upon initial evaluation in patients with severe hypothyroidism or myxedema coma, so prompt diagnosis can lead to complete recovery.

Human subjects: Consent was obtained or waived by all participants in this study. New York Presbyterian Brooklyn Methodist Hospital Institutional Review Board issued approval n/a. Per recommendation of our Institutional Review Board, this case report was exempted from Institutional Review Board review. Informed consent was deemed unnecessary as personally identifiable information was removed.
. Conflicts of interest: In compliance with the ICMJE uniform disclosure form, all authors declare the following: Payment/services info: All authors have declared that no financial support was received from any organization for the submitted work. Financial relationships: All authors have declared that they have no financial relationships at present or within the previous three years with any organizations that might have an interest in the submitted work. Other relationships: All authors have declared that there are no other relationships or activities that could appear to have influenced the submitted work.

© Copyright 2021
Chen et al. This is an open access article distributed under the terms of the Creative Commons Attribution License CC-BY 4.0., which permits unrestricted use, distribution, and reproduction in any medium, provided the original author and source are credited.