Axillary lymph node involvement is considered to be one of the most important factors in the staging and survival of breast cancer. Recurrences in women with a negative axillary condition detected as a result of long patient follow-up have revealed the importance of other prognostic factors and many studies have begun. The aim of this study is to evaluate breast cancer patients and to investigate other factors affecting breast cancer.

Patients with breast cancer who were operated in our clinic between January 2005 and June 2007 were included in the study. Demographic characteristics, tumor size, lymph node involvement, grade, histological type, the status of estrogen and progesterone receptors (ER and PR), type of surgery performed, and cerb-B2 receptor status were recorded retrospectively.

As a result; preoperative and postoperative staging of all breast cancer patients who applied to surgery clinics should be performed. Prognostic factors should be determined and patients should be directed to post-surgical treatment according to this information. Axillary lymph involvement, number, tumor size, estrogen receptor, progesterone receptor, and cerb-B2 status are safe markers that can be used to determine prognosis in our series.

Axillary lymphocyte involvement is the most important factor in the staging and survival of breast cancer [5]. Recurrences in breast cancer patients with negative axilla involvement after long patient follow-up revealed the importance of other prognostic factors. Numerous studies have begun on this subject (c-erbB-2, p53, cathepsin D, and so on). Although new genomic studies provide a comprehensive catalog of genes that accumulate somatic point mutations and small additions (indels) in estrogen receptor-positive (ER+) breast cancer, significant uncertainties remain regarding how these newly discovered mutations relate to disease outcomes [6-8].

The aim of this study was to evaluate breast cancer patients who applied for breast cancer and to investigate other factors affecting survival in the long term.

Patients with breast cancer who were operated in our clinic between January 2005 and June 2007 were included in the study. Demographic characteristics, tumor size, lymph node metastasis status, grade, histological type, estrogen and progesterone receptor status, type of surgery performed, and cerb-B2 overexpression were recorded retrospectively.

For the statistical analysis, the SPSS (Statistical Package for Social Sciences) for Windows 15.0 program (SPSS Inc., Chicago, IL) was used. In the evaluation of the data, descriptive statistical methods (mean, standard deviation), as well as the qualitative data, were compared by the chi-square test and the Fisher methods exact chi-square test; The significance test of the difference between the two percentages was used. The Kaplan Meier and log-rank tests were used in survival evaluations. The results were evaluated at the 95% confidence interval and the p<0.05 significance level.

The demographic and tumor characteristics of 64 patients included in the study are shown in Table 1. A total of three (4.7%) patients had local recurrence and six (9.3%) had systemic metastasis. Mortality was detected in three (4.7%) cases during the follow-up period. The mean follow-up period was 22.66 ± 9.69 (7-38) months. When the survival rates, according to the stages of the patients were examined, a statistically significant difference was observed between the stages (p <0.01). As the stage increases, mortality rates increase.

Table 2: Survival distribution in each stage according to ER and PR status

The study was started with 64 cases. Of the cases included in our study, seven patients had death or metastasis within the follow-up period and the last death time was 36 months. The survival rate corresponding to this time is 71.15%. The standard error is 1.06. Survival rates according to stages are given in Table 3. When compared to the log-rank test, survival was found to be lower than that of Stage 1 (p=0.002; p<0.01) (Figure 1).

Table 3: Survival status according to stages 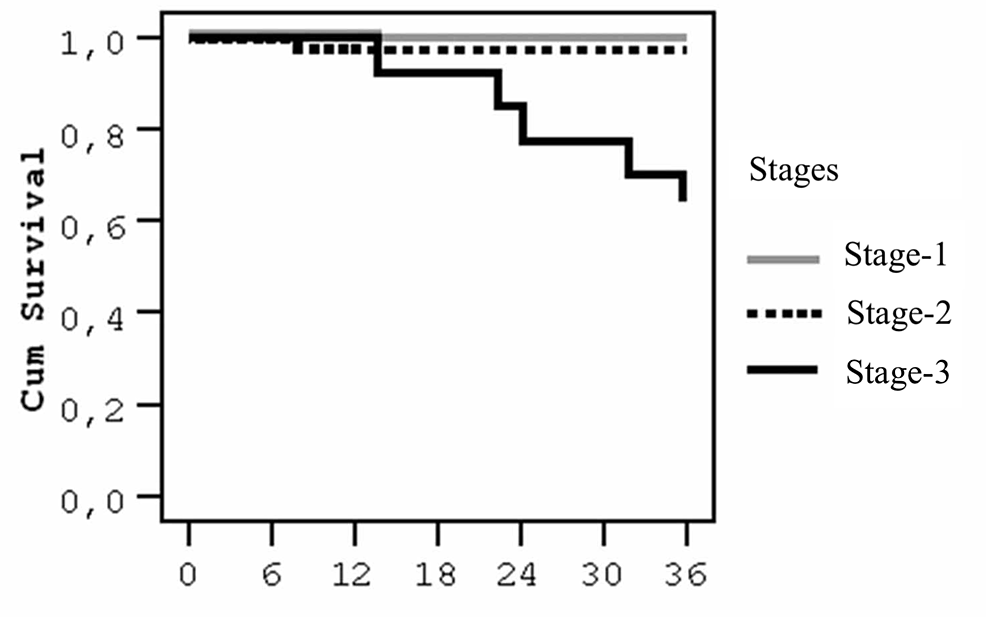 We detected seven cases with metastasis in the analyzed cohort of breast cancer patients. Those cases included six patients at Stage 3A and one patient at Stage 2B. Four or more axillary lymph nodes were involved in six patients, and there was one patient who had no axillary involvement. In four cases, both ER and PR were positive, while in two cases, both were negative. While the cerb-B2 score was positive in four cases, cerb-B2 was negative in three cases. Local recurrence developed in three cases in the 2A Stage. All of the patients had the involvement of three lymph nodes, all of which were positive for ER and PR, and two cases were cerb-B2 positive.

This study provides information on the effect of somatic mutations in ER (+) breast cancer with long-term follow-up and controlled treatment, providing new data on the sample. So far, many effective treatment models for breast cancer have been developed. However, each treatment strategy has been effective only for some individuals with breast cancer. Therefore, although we have predicted the natural course of the disease, it is very important to identify prognostic markers that allow us to determine the optimal treatment strategy and assess the future of the disease.

Breast cancer is not a single disease, with different courses and prognoses, different pathological processes should be evaluated as a combination of different pathological processes is becoming increasingly widespread. Long-term survival is associated not only with an early diagnosis but also with the biological behavior of the tumor and the potential for malignancy. The definition of recovery in breast cancer is also complex [2]. The most commonly used concept is statistical improvement. All of the studies evaluating the statistical improvement in breast cancer patients showed an ongoing mortality risk [3-4]. In these studies, the survival curve of breast cancer patients never becomes parallel to the normal population, and even after 25-40 years, the mortality risk continues to increase. In this study, we use the deoxyribonucleic acid (DNA) from the archive material to investigate the prognostic effects encoded by the mutational landscape of breast cancer. We have successfully used properly treated patient samples. We were able to confirm our prospective hypothesis from our previous studies.

The results of the studies are used to determine the steroid receptor status treatment decisions in breast cancer. Knight et al. showed that in 1977, ER had an independent prognostic significance in terms of early recurrence in early breast cancer [6]. Longer follow-up studies have shown that survival in ER (+) cases is longer than ER (-) cases [7]. Generally, ER has a strong predictive value for disease-free survival; PR is associated with overall survival because it is indicative of a better response to endocrine therapy in the event of disease recurrence. ER positivity, survival, and disease-free survival were higher in differentiated tumors [8]. In addition to studies that have no relationship between ER and axillary lymph node involvement [9], there are studies showing that there is a relationship between ER status and axillary lymph node metastasis in T1 tumors [10]. In our study, the mortality rate in cases with ER (+) - PR (+) and ER-PR were positive; ER (-) - PR (-) was found to be statistically significant (p<0.05). These results - the fact that ER and/or PR are positive is a significant prognostic factor and these patients have longer survival.

Gene amplification was measured in the first studies investigating the prognostic significance of cerb-B2. Survival was found to be worse in patients with axillary positive and cerb-B2 amplification [11]. In our study, the rate of cerb-B2 positivity was 42.2%. Although it is emphasized that there is a relationship between the decrease in survival and the positivity of cerb-B2, it should be noted that survival-related outcomes are controversial. Much work has been done on this subject [12-13]. Slamon et al. showed a significant independent relationship between cerb-B2 positivity and recurrence (p=0.001) and poor survival (p=0.02) in a multivariate analysis of the axillary negative case group [12]. There are also studies showing that cerb-B2 positivity refers to decreased survival in patients with axillary positive [14]. In our study, in cases with cerb-B2 positive, a statistically significant difference was found between the dead cases and the stage distributions of the right cases. Since no death was observed in the cerb-B2 negative patients, no statistical evaluation was performed. However, compared to the rate of death compared to the stages. In Stage 2 and Stage 3 cases, cerb-B2 positivity shows decreased survival.

As a result, all breast cancer patients should be staged preoperatively and postoperatively, factors affecting the prognosis of patients should be determined, and treatment protocols specific to each patient should be determined. Axillary lymph node involvement and number, tumor size, hormone receptor status, and cerb-B2 status are safe markers that can be used to determine the prognosis of patients.

© Copyright 2020
Evcimik et al. This is an open access article distributed under the terms of the Creative Commons Attribution License CC-BY 4.0., which permits unrestricted use, distribution, and reproduction in any medium, provided the original author and source are credited.

Table 2: Survival distribution in each stage according to ER and PR status

Table 3: Survival status according to stages