Early diagnosis and accurate assessment of the severity of the disease are critical factors in the management of acute pancreatitis (AP). In this study, we investigated the success rates of combinations of Bedside Index of Severity in Acute Pancreatitis (BISAP) scores with C-reactive protein (CRP) values in predicting severe AP.

The medical records of all patients with AP admitted to our hospitals from September 2015 to September 2018 were reviewed retrospectively. To evaluate the severity of AP, the revised Atlanta criteria were used, and patients who developed organ failure lasting more than 48 hours were considered to have severe AP. We analyzed patient CRP values at the 24-hour mark via receiver operating characteristic (ROC) curve analysis. Four groups were then formed to separate mild AP from moderate to severe AP. The first group had BISAP scores ≥ 3, the second group had CRP values ≥ 90.7 mg/L, the third group had BISAP scores ≥ 3 and CRP values ≥ 90.7 mg/L, and the fourth group had BISAP scores ≥ 3 or measured CRP values ≥ 90.7 mg/L. Predictive accuracy, sensitivity, specificity, and positive and negative predictive values of groups in the prediction of severe AP were calculated.

CRP may increase the success of BISAP scoring in predicting the severity of AP.

Acute pancreatitis (AP) is an inflammatory condition which may be mild or severe; in severe cases, pancreatic enzymes can cause damage to the gland itself [1]. AP has many different etiologies, and overall mortality is 5% to 10%. Most cases (80% to 90%) are mild or self-limited and have a good prognosis. The remaining 10% to 20% of cases warrant monitoring in intensive care units due to pancreatic necrosis or distant organ damage. Severe AP cases usually require surgical intervention, and overall mortality can be up to 40% [2].

Early diagnosis and accurate assessment of the severity of the disease are very important factors in the initial evaluation and management of the disease. Mild cases can be managed by fluid resuscitation and supportive treatment, but severe cases usually require nutritional support and intensive care follow-up. It is crucial for clinicians to identify these cases because severe cases may deteriorate rapidly [3].

Some scoring systems based on clinical and biochemical data have been used for the last 50 years, including Ranson’s Criteria for Pancreatitis Mortality, first described in 1974, the Bedside Index of Severity in Acute Pancreatitis (BISAP), and the Acute Physiology and Chronic Health Evaluation (APACHE) II. Each of these scoring systems has its own limitations, such as low sensitivity and specificity, the complexity of the scoring system, and the inability to achieve a final score up to 48 hours after admission [4].

Ranson’s Criteria, as a scoring system, was a major step in evaluating the severity of the disease and has been involved in clinical use for over 40 years. Ranson’s criteria is moderately successful in evaluating disease severity. Obtaining the score requires a very valuable period of 48 hours (especially valuable regarding early treatment) [5]. The Ranson scoring system also includes parameters not routinely used in most hospitals.

BISAP is a scoring system where the severity of the disease can be evaluated during admission. BISAP contains five parameters: blood urea nitrogen (BUN) > 25 mg/dL, mental state deterioration, age > 60 years, pleural effusion, and ≥ 2 systemic inflammatory response syndrome criteria. The mean mortality for each positive parameter increases, for example, when the score is 0, the mortality is 0.20%, and the mortality rate is 22% to 27% if all parameters are positive [6]. BISAP has been validated in many prospective cohort studies and has proven useful in clinical follow-up to predict necrosis and mortality. The biggest advantage of Ranson’s criteria compared to BISAP is that Ranson’s informs on the development of persistent organ failure, BISAP does not provide information about temporary or persistent organ failure. To calculate BISAP, we need anamnesis, physical examination, simple laboratory tests, and chest radiography, and all of these parameters are evaluated in routine emergency department processes. The superiority of BISAP is due to its simplicity and the fact that the patient can be easily calculated during emergency service follow-up [7]. However, publications are reporting the sensitivity of BISAP for AP severity as 37.5% [8] and specificity as 50% [9]. Therefore, there is a need for a parameter to be evaluated in the practical, emergency service routine which will contribute to the sensitivity and specificity of the BISAP.

C-reactive protein (CRP) is still one of the more useful biochemical parameters, although it still reaches its peak at 72 hours after the onset of symptoms. However, as far as we know, there is still no published study on the success of BISAP in combination with CRP regarding predicting the severity of pancreatitis [10].

The aim of this study was to investigate the success rates of combinations of BISAP with CRP values in predicting severe AP.

We scanned the electronic data system and gathered files of patients hospitalized from September 2015 to September 2018 with the diagnosis of AP in the emergency room of our hospital. Patients with incomplete files or electronic records, acute cholecystitis or cholangitis during admission or follow-up, or chronic pancreatitis in previous computed tomography (CT) images or in hospitalization were excluded from our study. We also excluded patients who did not have biliary ultrasound imaging in the first 24 hours after admission, patients from another center, patients diagnosed with AP outside of our emergency department, and patients whose CRP levels were studied at the 24th hour of admission. The patients who were admitted to our hospital with the diagnosis of AP in our hospital according to the revised 2012 Atlanta criteria (i.e., abdominal pain suggestive of AP, increase in amylase and/or lipase levels three times higher than normal, and CT findings in classic AP findings) [11] were included in the study. To evaluate the severity of AP, the revised Atlanta criteria were used, and patients who developed organ failure lasting more than 48 hours were considered to have severe AP. The cases with local or systemic complications and/or in whom organ failure was detected in under 48 hours were accepted as moderate or severe pancreatitis. The others were considered as mild AP. Organ failure in three organ systems (i.e., renal, respiratory and cardiovascular) were examined according to the modified Marshall score [11].

CRP values of the patients who were hospitalized with the diagnosis of AP at the 24th hour were examined by receiver operating characteristic (ROC) curve analysis. The CRP cut-off value with the highest sensitivity and specificity was found in the differentiation of mild and moderate or severe AP, and this value was noted as the optimal CRP value. Four groups then formed to separate mild AP from moderate to severe AP. Cut-off values were BISAP ≥ 3 for the first group, CRP ≥ optimal CRP value measured for the second group, BISAP ≥ 3 and measured CRP ≥ optimal CRP for the third group, BISAP ≥ 3 or measured CRP ≥ optimal CRP for the fourth group. We compared the sensitivity and specificity of these four groups in the evaluation of mild AP with that of severe AP. 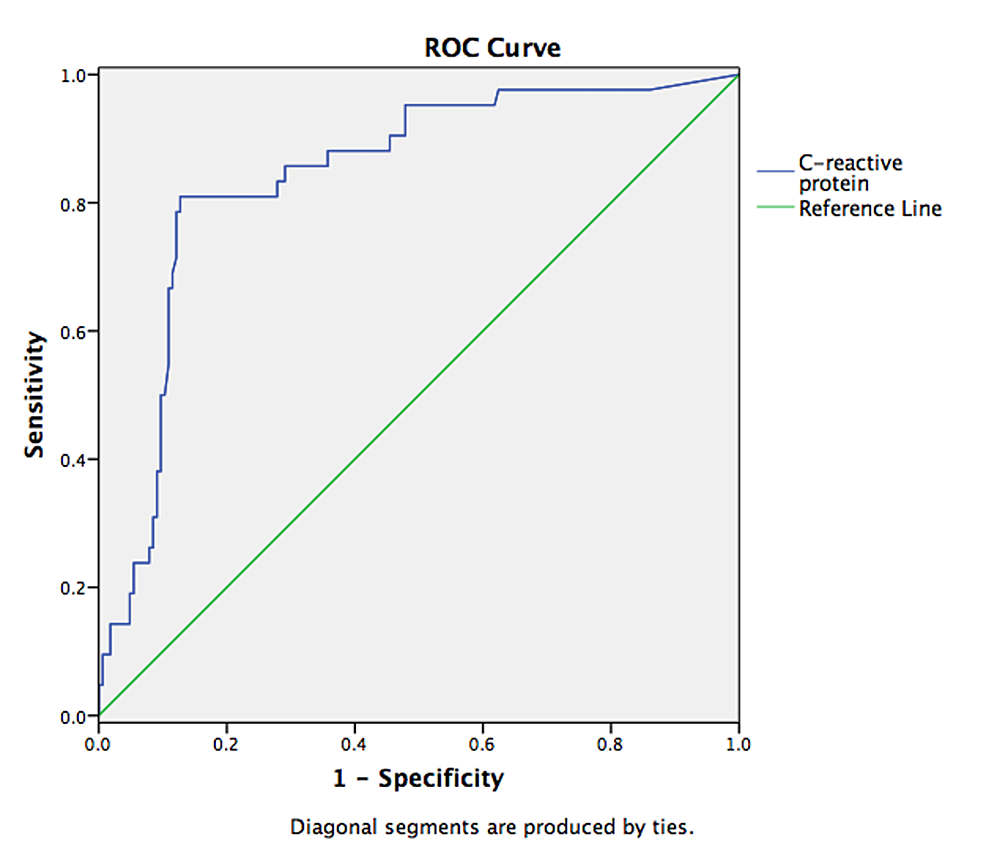 Predicting the severity of AP is still a challenge. Although many systems have been developed for early detection of severity and prognosis of the disease, none of these systems are excellent [19]. Many models have been defined based on clinical, radiological, and laboratory findings. Some clinical indicators were used for this purpose such as advanced age (> 75 years), but obesity and alcoholic pancreatitis poor prognostic indicators [20-21].

Studies that use the clinical judgment of experienced physicians had sensitivity and specificity values of 39% and 93%, respectively [22]. Most clinical scoring systems are not suitable for use by emergency physicians [6,23-24]. For example, the most well-known scoring system, Ranson’s, is not suitable for use in the emergency department because it requires at least 48 hours of hospitalization to complete [23]. Furthermore, much of Ranson’s criteria evaluations cannot be conducted in the emergency department.

Our study was limited by its retrospective design and conducted in a single centre with a relatively small sample size, which limits the generalisability of our findings.

As a means of predicting the severity of AP, the use of CRP in combination with the BISAP scoring system is a promising option over existing prediction methods and is feasible for deployment in emergency department situations.

Human subjects: Consent was obtained by all participants in this study. University of Health Sciences Hamidiye Non-Interventional Research Ethics Committee: issued approval 46418926-050.03.04 (18/91). The project proposal of "Can C-reactive Protein Increase the Efficiency of the Bedside Index of Severity in Acute Pancreatitis Scoring System?" numbered 18/91, which you submitted for evaluation, is evaluated at our Board meeting dated 28.12.2018 and it is deemed to be ethical. Animal subjects: All authors have confirmed that this study did not involve animal subjects or tissue. Conflicts of interest: In compliance with the ICMJE uniform disclosure form, all authors declare the following: Payment/services info: All authors have declared that no financial support was received from any organization for the submitted work. Financial relationships: All authors have declared that they have no financial relationships at present or within the previous three years with any organizations that might have an interest in the submitted work. Other relationships: All authors have declared that there are no other relationships or activities that could appear to have influenced the submitted work.

© Copyright 2019
Yigit et al. This is an open access article distributed under the terms of the Creative Commons Attribution License CC-BY 3.0., which permits unrestricted use, distribution, and reproduction in any medium, provided the original author and source are credited.