Neuroendocrine tumors (NETs) are rare, representing less than 1% of all malignant tumors. The most common sites of origin are the pancreas, intestine, and lung. Approximately 10% of all NETs have an unknown site of origin. These NETs often metastasize to the liver, lung, and bone [1]. Cardiac metastasis of NETs is uncommon. This is a unique case of a patient with a history of neuroendocrine tumor of the left femur presenting with new onset heart failure.

A 68-year-old male with a past medical history of a neuroendocrine tumor (NET) of the left femur presented with progressive dyspnea, orthopnea, and lower extremity edema. Three years ago, the patient was found to have a mass on the left femur. Biopsy revealed poorly differentiated neuroendocrine carcinoma of unknown primary. He had undergone surgical resection of the left femoral tumor and above-knee amputation with adjuvant chemotherapy (cisplatin and etoposide) and radiation therapy. Routine surveillance imaging showed no evidence of malignancy. Chest computed tomographic (CT) and magnetic resonance imaging of the abdomen/pelvis with contrast were performed at three-month intervals for the first year followed by six-month intervals. The patient was in clinical remission for the last two years. 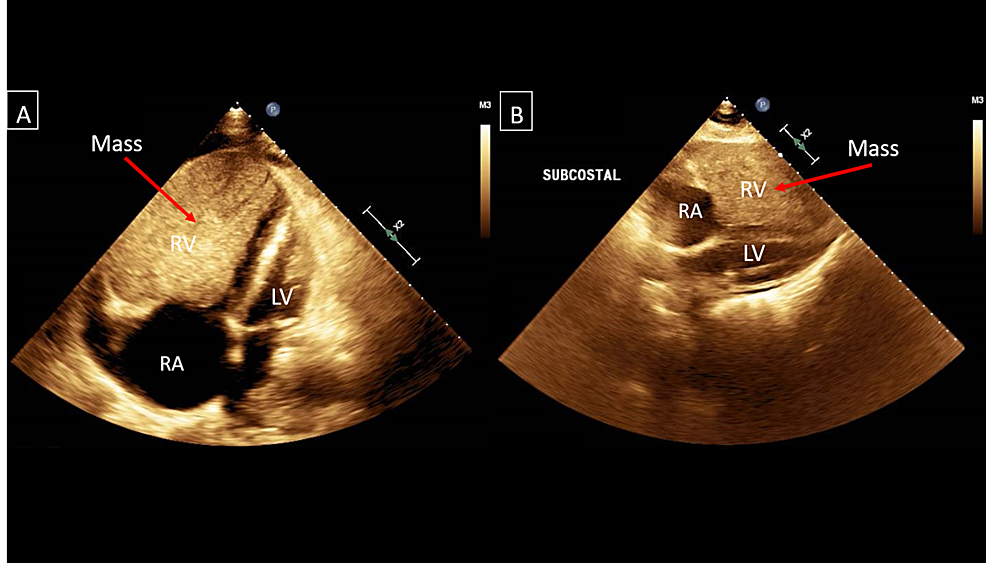 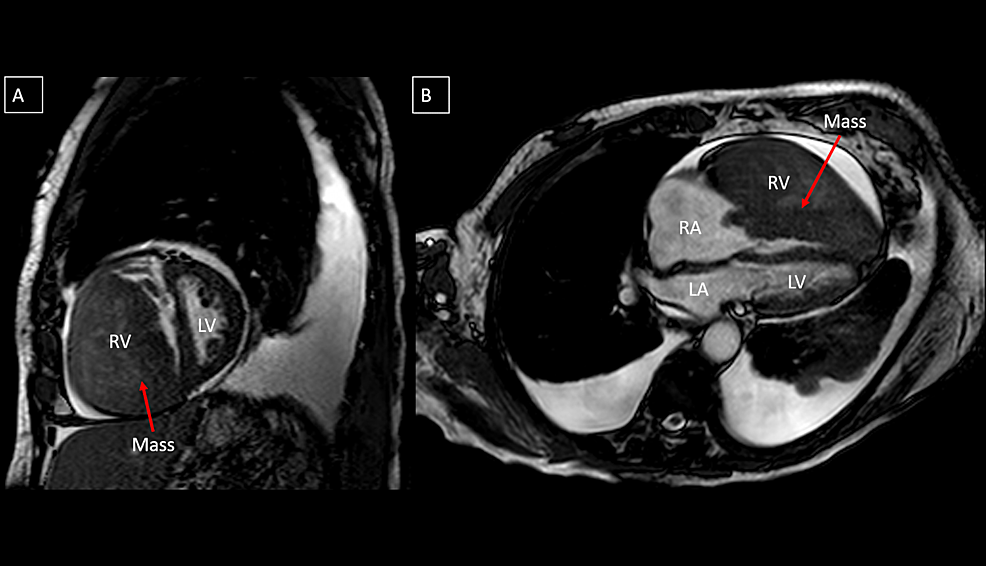 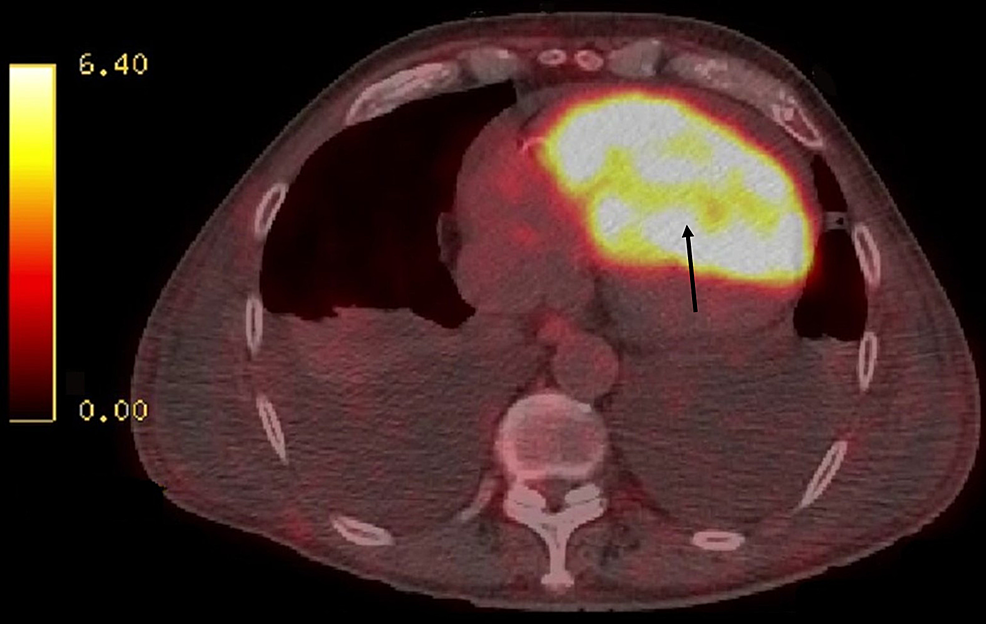 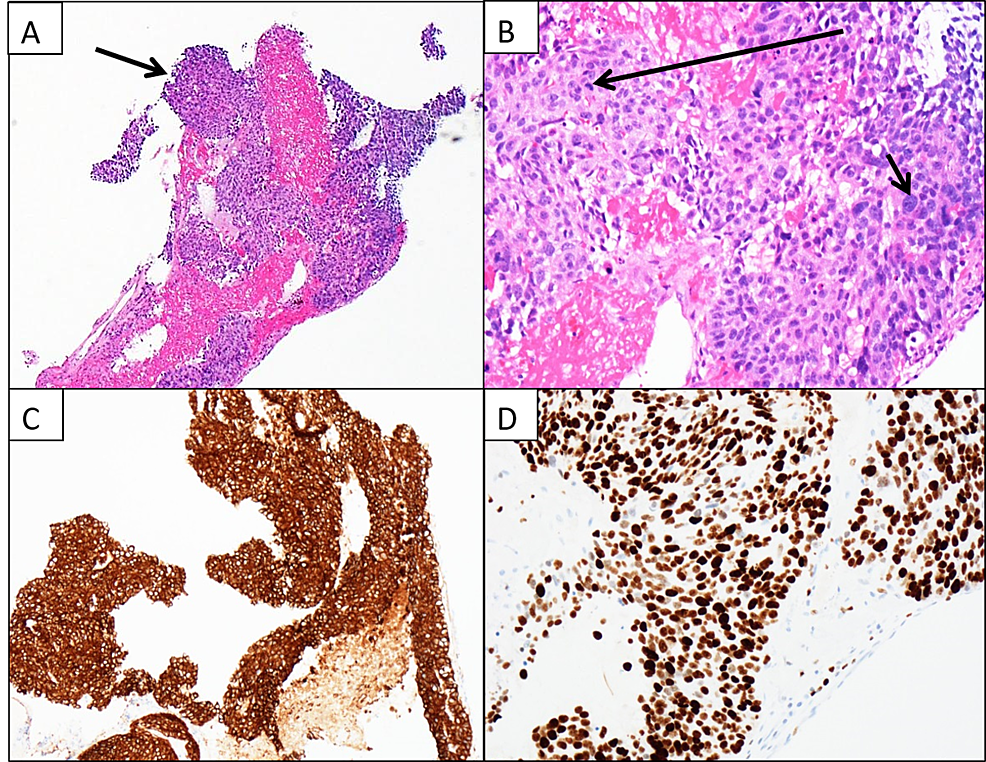 Figure 4: Histopathology and immunohistochemistry for metastatic tumor of the heart.

Neuroendocrine tumors can be functioning or nonfunctioning depending on the presence or absence of hormonal hypersecretion. Functioning neuroendocrine tumors often release various vasoactive substances (serotonin, histamine, and bradykinin). Typical presentation includes flushing, wheezing, and diarrhea [3]. Heart failure in a patient with functioning NET is due to associated carcinoid heart disease. This involves secretion of vasoactive substances, leading to plaque-like deposits of fibrous tissue on cardiac valve cusps and leaflets. Our patient had a nonfunctioning NET, negative for all biomarkers including 5-hydroxyindoleacetic acid (5-HIAA) and chromogranin [4-5]. Congestive heart failure was due to intra-cardiac metastasis by the tumor.

Metastatic spread to the heart is more common than primary heart tumors. The most common tumors to metastasize to the heart include leukemia, lymphoma, and melanoma. Depending on the size and severity of cardiac metastases, symptoms can vary. This includes intracardiac tumors causing conduction deficits and cardiac arrhythmias. Pericardial involvement can lead to inflammation and effusion of the pericardium [3]. In our case, a large tumor within the right ventricle caused outflow obstruction, leading to congestive heart failure.

Generally, treatment for cardiac metastases of NETs is palliative. It is based on the primary tumor [3]. Our patient was initially treated with cisplatin and etoposide for NET of the left femur with unknown primary. Due to this exposure, the patient was switched to second line treatment cyclophosphamide and doxorubicin [6]. The patient tolerated chemotherapy well with improvement of symptoms. Radiation therapy was not indicated due to the risk of fibrosis of lungs and myocardium. Surgical resection was not performed given the high comorbid risk [3].

There have been only a few reports of neuroendocrine tumor metastasis to the heart. Cardiac metastasis is often asymptomatic and detected on autopsy [7]. Nonfunctioning neuroendocrine tumor presenting with congestive heart failure has not been previously reported. This is a unique case with radiologic and pathologic evidence suggestive of a nonfunctioning NET causing congestive heart failure.

© Copyright 2018
Sood et al. This is an open access article distributed under the terms of the Creative Commons Attribution License CC-BY 3.0., which permits unrestricted use, distribution, and reproduction in any medium, provided the original author and source are credited.

Figure 4: Histopathology and immunohistochemistry for metastatic tumor of the heart.