Obesity is one of the risk factors for pancreatic cancer and a prognostic factor for acute-chronic pancreatitis.

To explore the relationship and association between obesity and pancreatic cysts over a 25-year period in African American patients.

We reviewed the medical records of 207 patients diagnosed with pancreatic cysts via radiology and pathology data from January 1988 to December 2012. A control group was selected from a separate group of healthy patients without a history of pancreatic disease. The patients were evaluated in five groups according to the last 20 years of diagnosis in five-year intervals.

Most patients with pancreatic cyst (73%) were overweight (defined as a body mass index (BMI) ≥ 25), and 53% had a history of chronic pancreatitis compared to patients in the control group. There was a significant difference between the two groups; 79% of patients group were overweight (BMI ≥ 25) vs. 66% in control group (p = 0.02). The incidence of obese and overweight patients was significant (85%) during the 2008 to 2012 interval for the test group (p = 0.009).

In this retrospective study, we reviewed the medical records of 207 referred African American patients with chronic abdominal pain, nausea and vomiting, early satiety, and weight loss during the period from January 1988 to December 2012 who were also diagnosed with pancreatic pseudocysts by some attending gastroenterologist at Howard University Hospital based on radiological, clinical, laboratory, and pathology data. In this study, pancreatic pseudocysts were mainly detected by abdominal computed tomography (CT) scans. Cyst had characteristic features such as a well-defined wall, homogeneous fluid density, and no non-liquid components. CT scan with intravenous contrast medium and pathology reports helped to diagnose pancreatic cystic neoplasms. The study was approved by Howard University Institutional Review Board.

We used frequency and median (interquartile range) to show the distribution of categorical variables and age. We used the Kruskal-Wallis or Chi-square test to determine the association between clinical variables and pancreatic cystic neoplasms or chronic pancreatitis. Statistical analysis was done by STATA 13.0 (StataCorp., College Station, TX).

In pancreatic cyst patients, 85% of older patients (≥65 years old) and 70% of patients < 65 years had BMI ≥ 25 (p = 0.06). There was no significant difference between patients with pseudocysts and pancreatic cystic neoplasms with regard to demographic or clinical history.

Table 2: Distribution of demographic and clinical variables by history of chronic pancreatitis.

Finally, the patients were evaluated in five groups according to the year of diagnosis in the five-year interval. For the first group (those diagnosed before 1997), we had no overweight patients. The incidence of being overweight among the case group was 83% during the last five-year interval (2008 to 2012, p = 0.009). The rate of being overweight (BMI ≥ 25) from 1993 to 2012 has increased from 72% to 83%, respectively. The frequency rate of pancreatic cysts among our patients has increased from 1.4% to 38.1% (Figure 1). 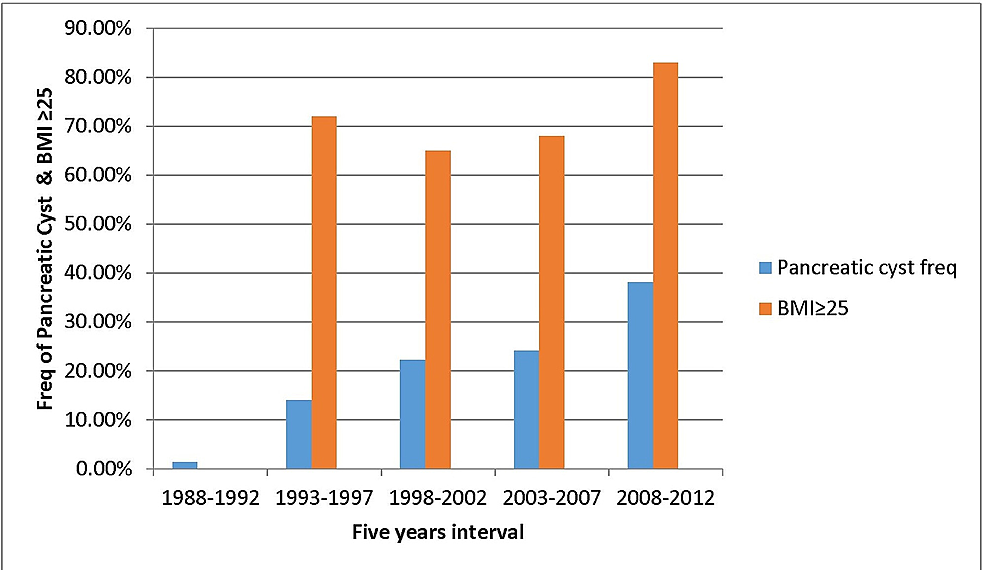 Figure 1: Pancreatic cyst frequency and body mass index (BMI) according to the year of diagnosis in five years interval.

We had some limitations for selecting the control group in this study. The rate of obesity in the general population of African Americans published by the Centers for Disease Control and Prevention increased from 54% in 1994 to 69% in 2012 [10]. It demonstrates the rate of obesity among patients with pancreatic cysts is higher than that of the general population and assumes obesity is a risk factor for the development of pancreatic cysts even without a history of chronic pancreatitis. However, to prove this hypothesis, we require an additional study with a large number of patients in the test and control groups gathered from more recent years. In elderly patients (i.e., those aged ≥ 65 years), obesity’s effect as a risk factor to develop pancreatic cysts is greater than in other patient age groups. In our pancreatic cyst patients, 85% of patients ≥ 65 years had BMI ≥ 25, which was more than the incidence of obesity in the general African American population.

Although pseudocysts and cystic tumors have different pathophysiology, obesity can play a big role in cyst production and development. Pancreatic cancers are more likely to exist in men than in women and more in African Americans than in whites [11,12]. Smoking increases one's risk of pancreatic cancer two to three folds. Alcohol consumption is also considered a risk factor for pancreatic cancer [13-19]. In acute and chronic pancreatitis, obesity is a significant prognostic factor during hospitalization, and BMI independently predicts complications [20,21].

Obesity in the United States has been increasingly cited as a major health issue in recent decades [23], and our study shows that the rate of pancreatic cysts and its association with obesity is also increasing in recent decades. Currently, the detection rate of pancreatic cysts has increased due to the utilization of imaging facilities. However, the rate of obesity has increased in the United States, too. Therefore, it is difficult to disregard the role of obesity in pancreatic cyst formation because of the concurrent increase in the prevalence of obesity.

© Copyright 2018
Shahnazi et al. This is an open access article distributed under the terms of the Creative Commons Attribution License CC-BY 3.0., which permits unrestricted use, distribution, and reproduction in any medium, provided the original author and source are credited.

Figure 1: Pancreatic cyst frequency and body mass index (BMI) according to the year of diagnosis in five years interval.

Table 2: Distribution of demographic and clinical variables by history of chronic pancreatitis.